It’s finally here, the phone for the masses. This review will hopefully clear most of your doubts and queries with the numerous levels of comparison. This is a full blown, no-holds barred, as-honest-as-it-can-get personal review (and is in no way sponsored by anyone in any way). If you’re not interested in reading the background, you can scroll down directly to The Good Stuff below.

So just after I started writing this review, whilst I was still on the very first line, I encountered a few quality issues for which I claimed a replacement. And about a week later, I’m back in action with a brand new device, due to the prompt response of Xiaomi Customer Care.1

Now, you might think cheap China stuff, poor quality control, right? Nope, dead wrong. I have worked with one of the biggest online retailers and have personally faced similar issues (from the customer’s end) with all the major brands like Apple, Samsung, HTC (most of which are also manufactured in China, yes they have factories in other places as well but that doesn’t change the manufacturing processes) and any other premium brand that you can think of. The difference between them and companies like Xiaomi, LeEco, Lenovo, and so on, is the quantity. The percentage of quality issues is pretty much the same across the board, just that the lower cost devices sell in larger numbers, hence the relatively larger number of faulty devices. So, in today’s world, you if you want a good low cost device, you need to have some patience. And this is my 2nd Xiaomi mobile phone and 5th Xiaomi device and each one has been worth every penny (or paisa, whichever you prefer). The Redmi 3S Prime continues to hold this tradition of my experience with Xiaomi, read on to know more.

The Redmi 3S Prime, why did I choose this phone you ask? I’m one of them power-users who pretty much live off their phone (and no, I’m not referring to social networking, and neither does that mean that I don’t use them at all just that the frequency of usage is lesser in comparison) because of the nature of my work. I’m coming down from a Samsung Note 4 which was walking the fine line and at times struggled to keep up with my demands. The funny thing is, I was actually eyeing the Samsung Galaxy Note 7!!! When the specifications turned up, I was heartbroken because there was no way I was spending that much money to get the exact same specifications as the Samsung Galaxy S7.

So then I started looking at the Redmi Note 3 and then this was due for launch a couple of days later. Then, I received an invitation for the launch event for the Redmi 3S from a close friend! In all honesty, I wasn’t expecting much for the price it was targeting but I went anyway and I’m so glad that I did! We got a detailed breakdown of the device’s hardware which piqued my interest gradually. By the end of the presentation, I began to wonder, would it be able to match if not beat my Note 4’s performance? At this price, I laughed off the ridiculousness of the thought. Then we got a chance to experience the device first hand. MIUI has always been smooth, fast and amazing at memory management, so obviously I was standing there with a MASSIVE question mark on my face. Could it be? Can the hardware take the beating that my Note 4 struggles with? A small gallery of the hands-on experience at the launch event is given below.

For 2 days after that, I did as much research as possible comparing mainly the CPUs and their performances. Hilarious, right? A SnapDragon 800 (in my Mi 3) and the venerable SnapDragon 805 (in my Galaxy Note 4) versus one of the lowest end offerings from SnapDragon, the 430. The more I researched, the more and more question marks popped up. Reviews of other devices having the same were causing more confusion than it solved with conflicting views and benchmarks. After these 2 days, I caved and decided that buying the phone wouldn’t harm me in any way, so might as well just buy the device and sort out this puzzle for myself. With this question scratching away at my brain, I requested all my Xiaomi buddies to help me get one (in case I couldn’t get one myself) so that this puzzle doesn’t drive me nuts by making me wait till the next sale.

After everything, I finally got my hands on one and the conclusion? In short, my suspicions were confirmed. Thank you for bearing with me on the background of this review. The juicy details are given below!

To start off with, the full specifications are given below,

Yes, yes, I was a bit lazy to list out the specifications myself. But I’ve gone a bit more in depth into the features below.

If you’re aware of the Redmi Note 3, well then this is a carbon copy just scaled down by a tenth of the size. I’ve got the Dark Grey colour and it’s a stunner. The curved metal design that Apple has been trying to perfect in each iteration, Xiaomi has shown them how it’s done in the very first instance with the Redmi Note 3 and now again with the 3S. The chamfered ring around the fingerprint sensor, the buttons on the side and the ring around the camera lens gives it a very premium feel and the finishing is top notch. In terms of design, it has no competition at this price, period. It is also available in Silver and Gold colours.

Assuming that this follows the same/similar build to that of the Redmi Note 3, the 2 panels on the back, towards the top (the bit that houses the camera, flash, headphone jack, IR Blaster and mic) and bottom of the phone (which houses the speaker grill, USB port and mic) should be made of plastic. This should explain the slight difference in the shade of colour between the back panel and the other 2 in question. The buttons are made of metal just like in the Redmi Note 3.

Okay, so this device costs INR 8,999/-, what would you expect from it? Mediocre performance right? Well then, check the screenshots below for the an eye-opener.

FYI, these benchmarks have been taken with the same set of apps in all 3 phones, actually a few extra in the Redmi 3S Prime (about 120 apps) and it still beats my Galaxy Note 4 (about 100 apps, I had to unload a few apps because it had started to lag quite a bit). Yes, I know that this is not the way benchmarks are done, I lost the stock benchmarks when I stupidly gave back the phone without taking a backup of the screenshots and now my phone is packed because I knew that it’ll be able to handle my use easily without lagging, and it does just that, without a fuss! Just FYI, the stock score for the 3S Prime was ~38xx on Geekbench. I will be uploading bone stock benchmarks soon though along with a few other benchmarks as well.

Xiaomi has also used Samsung’s UFS 5.1 eMMC storage media (The 64GB eMMC 5.1 memory features a maximum speed of 250 megabytes per second (MB/s) for sequential data reading and 125MB/s for sequential writes. I’m guessing it’s the same for the 32 GB version as well.) in the Redmi 3S Prime which is of the highest quality used in the current Samsung flagships.

No issues with RAM management, MIUI does it’s job beautifully as it always has and is known for!

GPS is quick to lock on, less than 2 seconds when in the outdoors (and this refers to a full GPS lock, not on Google Maps and such) which is pretty fast.

One thing to be noted here is that it doesn’t support 5 GHz band for WiFi. So if you absolutely must have 5 GHz, this device is not for you. That being said, it performs pretty well on 2.4 GHz.

The battery life on the 3S/3S Prime is insane! To give you an example, I charge my Galaxy Note 4 2-3 times a day! A few screenshots given below for the same. I have finally found a phone that can last me a full 24 hours with my eyes closed! Rest assured most of you should  easily get 48 hours of use out of this phone. Something to note, AIDA64 reports 4000 mAh but the given rating advertised is 4100 mAh, not sure if this affects anything in any way.

The camera is decent enough. The 13 MP rear camera performs like a champ, though it could’ve been a little more responsive (since it has PDAF) and has trouble focusing for macro/close-up shots. It’s good enough for today’s internet age and the images are not at all sub-par. The images could’ve been a bit brighter though. One thing to be noted here is that low light photography is a strength of this camera and true to it’s words, though some aspect of the low light grains remain, the amount of details present is surprising. It’s definitely better than the Mi3 in comparison and quite close to my Galaxy Note 4 (only in respect to low light photography).

Videos are recorded in Full HD (1080p) at the max though AIDA64 reports that it natively supports 4K (for video recording specifically), so does Everest. So, we should have some third party apps that will be able to take advantage of this (will test and put up some results if I’m successful).

The front camera is a 5 MP snapper that does it’s job quite well. No negatives here but it’s not the best out there either.

There is no lag in the capturing of pictures and is a very responsive experience. All the features work well and none of them are gimmicks in any way (except maybe the age detector, I don’t get the point of that). I will be putting up a few more examples later in terms of comparison but for now here are a few.

Note the details in the center wall hanging is much more in the Redmi 3S as compared to the other 2 phones (yes it’s marginal but that’s the deal). Note the design of the wall on the top as well, much more pronounced than the Mi3, and it obviously can’t beat the Galaxy Note 4 in a well lit environment.

The display is also pretty stellar. It’s a 720p 5″ screen with vibrant colours and deep blacks. Sunlight readability is also pretty good but the screen is pretty reflective and that’s the only point of hinderance in the outdoors. A matte screenguard should fix that, if it really annoys you. The 294 ppi doesn’t really feel like so and it’s brightness levels are quite high. There is also a notification light right under the Home button, a really nice touch. And oh yes, the Navigation Buttons aren’t backlit, though I don’t find this to be negative at all.

I have finally found a phone that I can use! Could do with a better camera in terms of the temperature of the photos being taken though, but I’m happy with it nonetheless! Rest assured you will be too! For the price, it’s a no compromise, rock solid phone with obliterating performance (for the price)!2

2 These are my views solely and is not influenced by any external factors. Experiences may vary depending on personal preference 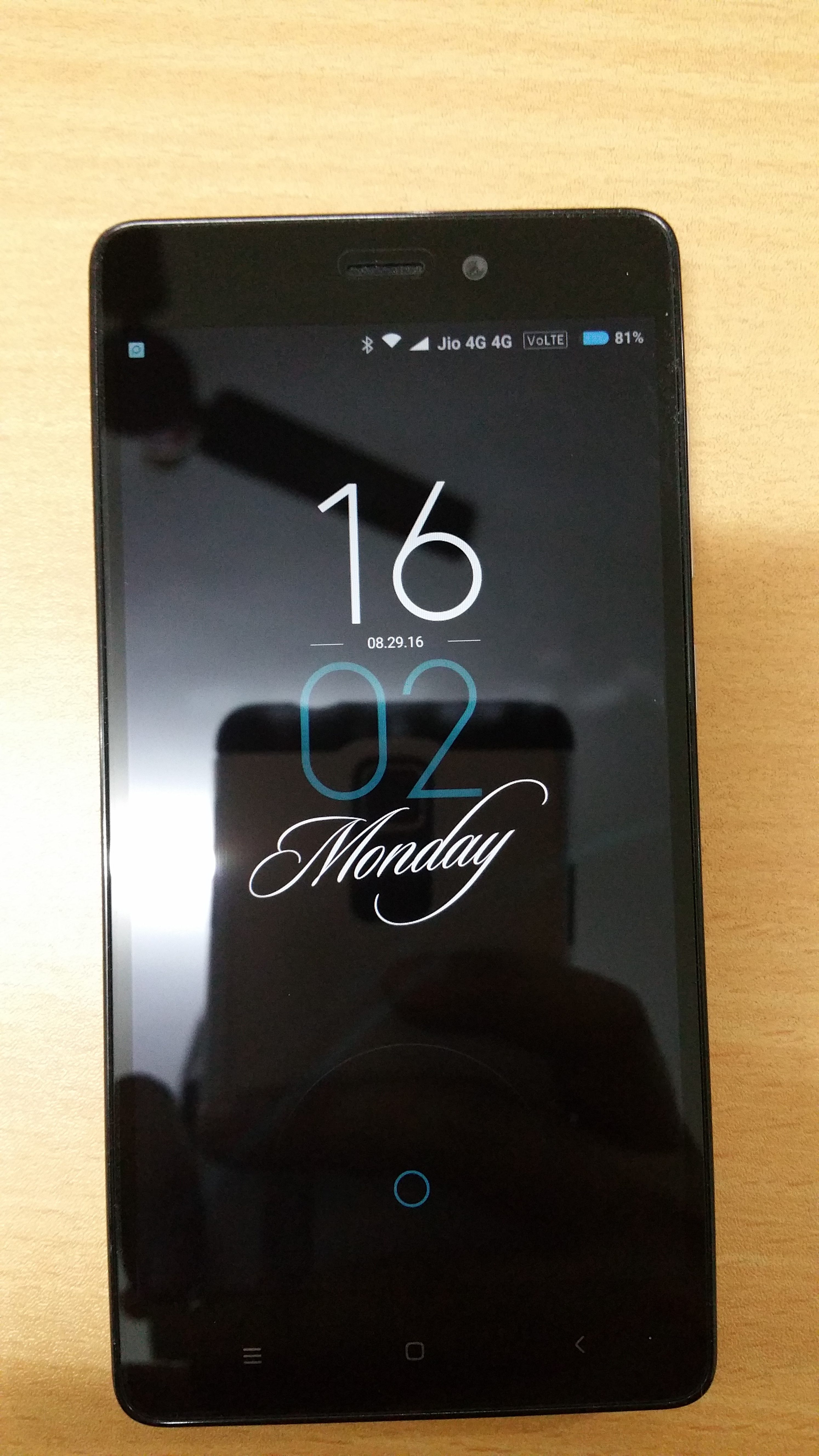